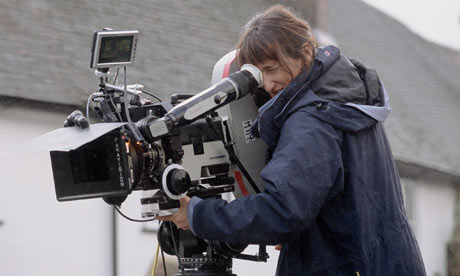 Reposted from Screen Daily. Image from The Guardian

The BFI has released new research highlighting the successful box office performance of UK independent films with a female screenwriter and/or director.

The snapshot is small but encouraging.

The picture is still more encouraging on what the BFI terms “profitable” UK independent films, where 30% of the writers were female. The report also shows that films with female writers or directors were more likely to have female producers or executive producers, and have received financial support through BFI Lottery and BBC Films or Film4. Earlier this year, the BFI’s statistical yearbook revealed that UK women writers declined from 18.9% of total writers (to have had films made) in 2011 to 13.4% (25 writers) in 2012. The picture for women directors was bleaker, with men accounting for 92.2% of directors on UK films in 2012, an increase of more than 7% year-on-year. This translates to 165 male directors in 2012 compared to 14 women directors.

Two weeks ago, Number 9 producer Elizabeth Karlsen told the audience at Screen International’s Diversify conference that male commissioning editors, women’s history being silenced and unconscious bias were all still hindering women in the UK film and TV industries. On the same panel, My Brother the Devil director Sally El Hossaini said she had faced prejudice when it came to the funding of her film:

“A public financier told my producer: ‘She’s a nice woman, can she really do a film about all these guys?’ That spurred me on.”

More positively this year Creative Skillset’s 2012 Employment Census highlighted that the number of women in the creative media industries has grown by almost 16,000 since 2009, with representation rising from 27% to 36% of the total workforce. In response to the gender gap, in October the French film industry and government signed an equality charter calling for 50:50 female to male ratios on festival and funding commissions and equal pay.