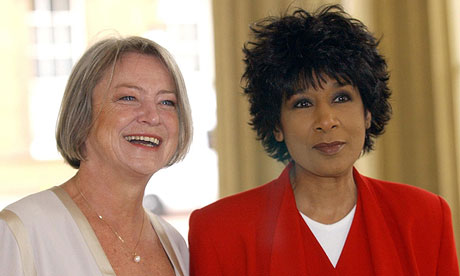 Fewer than one in five presenters at major broadcasters over the age of 50 are women, a new study reveals.

Research compiled from figures taken from the main UK broadcasters found that just 18% of presenters over 50 are women. BBC television and radio, Sky, ITN and Channel 5 combined have just 26 women over 50 working as regular on-air presenters out of a total of 481 presenters.

Overall, women over 50 make up just 5% of on-screen presenters of all ages and both sexes and 7% of the workforce, both on and off screen.

Senior executives at the BBC, ITV, ITN, Channel 4, Channel 5 and Sky are to meet members of the Older Women's Commission on Thursday to discuss what can be done to end such discrimination.

Harriet Harman, Labour's deputy and the shadow culture secretary, accused the TV industry of ageism and sexism. "It really is a black hole … Broadcasters behave as though the viewing public have to be protected from the sight of an older woman and that's just rude. There is nothing wrong with being an older woman.

"We've got to fight back against this sense that older women are less valuable, whereas men accumulate wisdom, authority and experience as they age."

Harman launched the commission last year to consider the experience of older women with a focus on three main areas: women in the workplace, carers and women in public life.

This latter group is chaired by Miriam O'Reilly, former presenter of the BBC's Countryfile, who won a landmark ageism case against the BBC two years ago.

She told the Guardian: "There is still ageism in TV. We need to get to a position where women are not being shown the door simply because of their age and it is just as unacceptable to drop someone because of age as it is for their ethnicity."

To read the rest of the article, click here.