Amma Asante's A Untied Kingdom was the opening film of the 2016 BFI London Film Festival. Starring David Oyelowo and Rosamund Pike, the film tells the true story of Seretse Khama, the king of Bechuanaland (modern Botswana), and Ruth Williams, the London office worker that he married in 1948 in the face of fierce opposition from their families and the British and South African governments. Seretse and Ruth defied family, apartheid and empire – their love triumphed over every obstacle flung in their path and in so doing they transformed their nation and inspired the world.

Following the press screening, we were joined by Amma and some of the cast, which also includes Tom Felton, Laura Carmichael, Jessica Oyelowo, Jack Davenport, Arnold Oceng and Nicholas Lyndhurst. Collectively, they spoke on the themes of the film, it's historical context and diversity in the film industry.

Love story or a political story?

Amma spoke about her previous film Belle sharing a similar backdrop in terms of being about both race and policitcs however, it was more complex this time around. The political themes in A United Kingdom were quite tricky and had global implications. Everyone was very conscious about getting the balance right. Love was the universal so the political context had to come through the prism of the couple and their fight to be with each other. David Oyelowo echoed this saying that we rarely see love on screen; we see lust very often but this is a stroy of unapologetic love. Love which toppled an Empire.

Jack Davenport's character embodies the British Empire in the film and is seen as a villain – the Empire itself was seen as the villain but it was important for the portrayal not to be too pantomime. Tom Felton raised the point that the people who were trying to keep Seretse and Ruth apart were by-products of what the system at the time dictated. Britain was proud of it's Empire but could feel it slipping. This is the context behind the actions seen in the film – fear of being responsible for a whole country losing it's place of perceived power in the world.

Was Botswana comfortable with outsiders telling such an important story about their history? Amma described going through the necessary channels to show respect the country its government and the village elders in order to build a level of trust before progressing with filming. She believed they found it comforting that the story was being told by a woman of colour, they trusted that she would do it right. There was also a curiosity about how they would be reflected on screen so Amma faced little opposition, if any.

David spoke about the apparent generational divide when it came to people in Botswana even knowing about Seretse and Ruth. Some of the younger generation are oblivious to the global political impact the couple had. In some schools, the history they are taught revolves around the British Empire and Britain's history. This is the product of colonialism; there is the risk that stories like Ruth and Seretse's are lost so it's important that the creative indisutries continue to bring these stories to light. 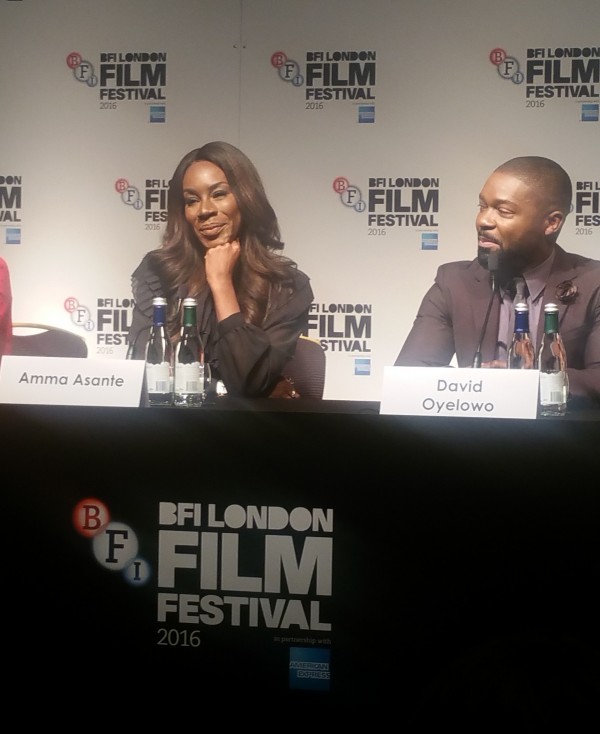 David hopes that people will see themselves in Ruth and Seretse – everyone can relate to love and the way it creates a bond between two people. This is the overarching message, bigger than a race issue. Rosamund agreed and berated the fact that many will put the story into the same category as films such as '12 Years a Slave' when it's a love story more than anything else. This is the issue with how people see films that touch on race, they tend to get lazy and just pile it all into one niche box.

On the flip side, it is also an important story about British history. Historically, there has been the argument that period pieces do not feature people of colour because there were none around at the time, but this film goes against this and shows how British and Africa's history intersect. Belle also showed how people of colour were in fact present and had a big impact on the course of the country we know today.

Amma spoke about the lack of female directors – women are 50% of the population so are not a minority; there should be more representation. This isn't a case of removing the men, it's about expanding the space and allowing other people the privilege to be storytellers. She praised Pathé for 'doing diversity' and not just talking about it seeing as they have been the producers behind A United Kingdom, Selma, Pride and Suffragette.

A United Kingdom is a recommended go-see. It's released in U.K. cinemas from 25th November.