David Oyelowo was the headline speaker at the BFI Black Star Symposium, where he was joined by British and international actors, filmmakers and thought-leaders to explore why opportunities for black actors to shine on screen in the US and the UK remain limited, and debated what more can be done to effect positive change.

In what was a passionate, eloquent and, at times, very emotional speech, David stated that we need people from diverse backgrounds in decision-making positions in order for the industry to move on from just talking about diversity to actually 'doing diversity'. There were three key factors which led him to this obvious conclusion:

It is human nature to have a bias. We naturally gravitate to people and stories that we can see ourselves reflected in. This doesn't make anyone racist, it just makes people 'human'. However, in the television, this has become the main barrier to the inclusion of diverse stories. If decision makers come from one particular demographic or walk of life, it is highly likely that they will commission stories that reflect their reality. What about 'other' realities. David spoke of a time when he tried to shop a historical film about a Black British boxer in. One reply from a producer stuck in mind and he read it out to the audience verbatim. Despite the producer loving the script, they were only concerned with stories about British history which were ripe enough for a revisit. There lies the conundrum – if the black British perspective has never been told, how can it ever be revisited? "Black history didn't start with the Windrush" David told the audience. The only way to challenge this bias is to ensure that people making the decisions about whether stories are from diverse backgrounds – it's the only way to challenge the current status quo.

With every story, there are a multitude of angles from which it can be told. No one way is better than the other, but it is different. With storytellers, what they tend to do is place themselves at the centre of the narrative. Again, this does not make them racist, it's a natural thing to do – you write and direct what you know to be your reality. If there are no people of colour writing and directing films, the following statistic uncovered by the BFI will only get worse: 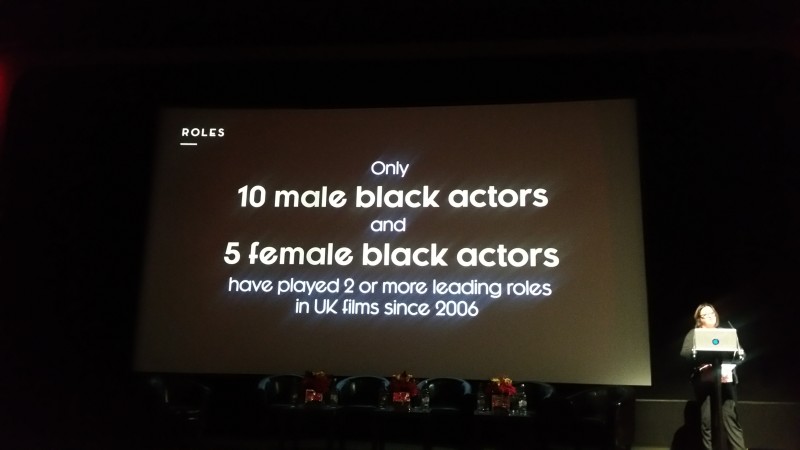 David spoke about Selma, its journey to screen and how it passed through a few directors before landing at Ava DuVernay's door. On that journey, it went from a story focused on Martin Luther King Jr. as a well-spoken leader to one which showed the relationship he had with his wife and children, his flaws as a husband, the uncertainty he experienced, the friendships that helped him along the way. He became multifaceted and was depicted in a way never seen before – he was made human.  The person telling the story determines the angle the story is told from – same story, different perspective. Therefore for more box-office winning, critically acclaimed, internationally lauded films like Selma to come to the fore, we need to make space for other perspectives to shine.

David made a clear statement: "If you are not a part of the solution, you are a part of the problem". It is up to the industry to make sure that the demographics of decision makers shift. It's not about getting a drama with Black talent to the screen and patting ourselves on the back saying "job well done". It's about having a consistent intention to challenge what stories are being told and by whom and to do this, you need people of colour in positions where they move from being just a cog in a wheel to a decision maker. From this position they will be able to exercise their own bias and perspective ensuring that diversity is baked into the foundation of where ideas some from.

It's fair to say that none of this is rocket science, however, it does set out a clear argument to the industry that tokentistic attempts at improving diversity are not enough. Things need to change from the inside out and it starts with the people who have the power to say 'yes'.

David later joined one of two panel sessions to debate the issues. Other panel members on the day included:

To see comments and statements from the panel sessions, visit the SceneTV Twitter feed.