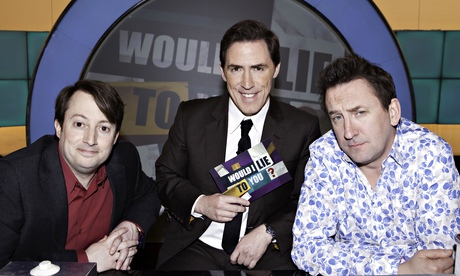 Reposted from The Independent  (image from The Guardian)

Mock The Week, Have I Got News For You, QI – all heavily male dominated BBC panel shows in which women guests are a scarce sight. Now, the BBC’s director of television has set out plans to tackle the issue head-on, by ordering that every episodes of each BBC panel show must have at least one female guest.

“We're not going to have any more panel shows with no women on them,” Danny Cohen told The Observer, “It's not acceptable.”

A BBC spokesperson has confirmed that, while all-male episodes already filmed will still be broadcast, all future programming will feature at least one female panel member or presenter.

“There may be very rare occasions where shows that were already recorded – or whose panels were already booked ahead of the order – still have all-male line-ups, but hopefully the change should really become apparent,” they said.

One of the worst high profile offenders is BBC Two’s Mock The Week. According to the corporation’s Radio Times, just five of the 38 guest spots in its most recent series were filled by females – Katherine Ryan and Holly Walsh appearing twice each and Ava Vidal once. Even Jo Brand – one of the few females to regularly appear on Have I Got News For You and QI, says she will no longer appear on Mock The Week due to the competitive testosterone fuelled nature of the show.

“And neither do some male stand-ups I know,” she told The Observer. “We didn't like the prospect of having to bite someone's foot off before they let us say something.”

Mr Cohen added that the corporation is also working to feature more older women on its programming. “We are getting better,” he said, highlighting the example of historian Mary Beard. “But we need to do more.”