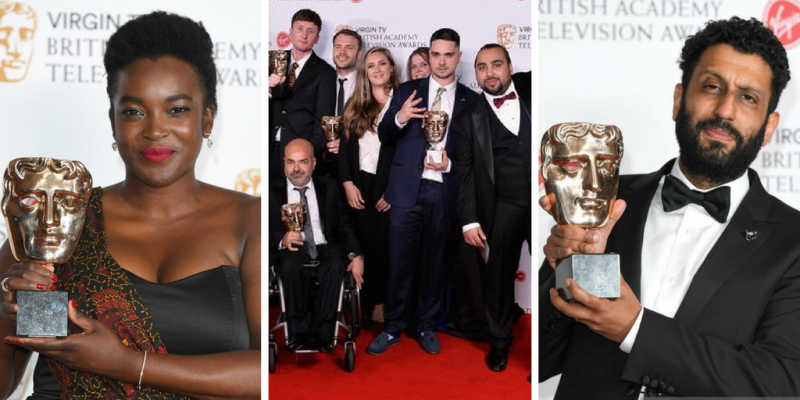 There were two awards for Damilola, Our Loved Boy, with first-time winner Wunmi Mosaku receiving the BAFTA for Supporting Actress. The true-crime drama, written by Levi David Addai, which retells the story of Damilola Taylor’s tragic murder and his family’s fight for justice, also received the award for Single Drama.

In the Leading Actress category, Sarah Lancashire won the BAFTA for her performance in Happy Valley. The West Yorkshire drama also won a second BAFTA for Drama Series, adding to the BAFTA that writer Sally Wainwright won at the British Academy Television Craft Awards last month.

Adeel Akhtar won the BAFTA for Leading Actor for his portrayal of a single father juggling the pressures of a community where honour means everything, for one-off drama Murdered by My Father. In Supporting Actor, Tom Hollander took the BAFTA for his performance as Lance ‘Corky’ Corkoran in The Night Manager, while National Treasure fought off the competition to win in Mini Series.

In the International category the BAFTA was awarded to The People v OJ Simpson: American Crime Story, the dramatisation of the infamous OJ Simpson murder trial. The BAFTA for Soap & Continuing Drama, which recognises the exceptional talent required to deliver stories that hold an audience over days, weeks and months, was awarded to Emmerdale for the second time. The BAFTA for Entertainment Performance was presented to Michael McIntyre for Michael McIntyre’s Big Show, while the award for Entertainment Programme went to Ant & Dec’s Saturday Night Takeaway, the programme’s third BAFTA in this category to date. Charlie Brooker’s 2016 Wipe won for Comedy & Comedy Entertainment Programme.

The Special Award was presented to Nick Fraser, one of Britain’s leading figures in the documentary field, in recognition of his outstanding creative contribution to television throughout a career that saw him launch and grow BBC’s Storyville strand and fund and develop hundreds of award-winning documentaries. His work includes India’s Daughter, Man on Wire, Notes on Blindness, Project Nim and Pussy Riot: A Punk Prayer.

The Fellowship, the highest accolade the Academy bestows, was presented to Joanna Lumley. With a career spanning 40 years, she has become one of the most acclaimed and distinctive performers in British television. Previous BAFTA recognition of Lumley’s work includes six BAFTA nominations, and awards for Comedy Performance (1995) and Light Entertainment Performance (1993) for Absolutely Fabulous. In 2000, she received the Special Award for The Avengers.

The Virgin TV’s Must-See Moment, the only award voted for by the public, was won by Planet Earth II: Snakes vs Iguana Chase.

Congrats to all of the winners! For the full list, see below. Red carpet highlights, backstage interviews with all the winners, clips of the nominated programmes and all the latest images from the night’s events are available at www.bafta.org/awards/television.

Female performance in a comedy programme

Male performance in a comedy programme

The Hollow Crown: The War of the Roses
National Treasure  – WINNER
The Secret
The Witness for the Prosecution

The Crown
The Durrells
Happy Valley  – WINNER
War and Peace

24 Hours in Police Custody
Exodus: Our Journey to Europe  – WINNER
Kids on the Edge
The Prosecutors: Real Crime and Punishment

The Doctor Who Gave Up Drugs
The Great British Bake Off
Travel Man: 48 Hours In…
Who Do You Think You Are?  – WINNER

The Centenary of the Battle of The Somme: Thiepval
Shakespeare Live! From the RSC
Stand Up to Cancer
The Queen’s 90th Birthday Celebration  – WINNER