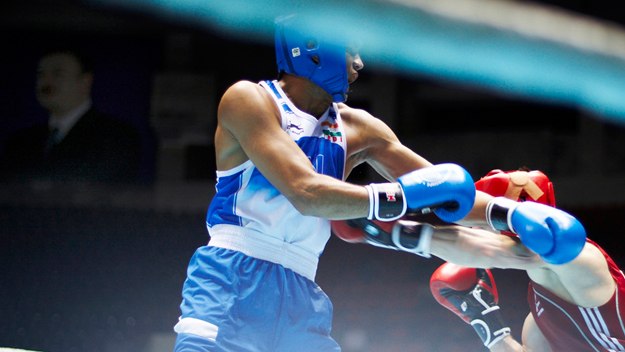 Knockout Scousers offers intimate access to three very different young athletes as they strive for a chance to make the GB Olympic boxing squad and qualify for the 2012 Games. Filmed over two years, the documentary charts the physical and psychological construction of modern day Olympians.

This is the directorial debut of photographer Steve Read, who captures gritty urban images and stories of working class struggle in contrast to the fanfare and glamour of the first British Olympics in over 60 years. Liverpool's tough areas of Huyton and Toxteth are known for their riots, racial tensions of the past and youth issues of today, but also have a story of hope to tell. Knockout Scousers has followed fighters as they emerge from the city's amateur boxing clubs to become contenders for the Olympic Games.

Natasha Jonas doesn't look like your average fighter; she's 28 and beautiful. But 2012 is the first year female boxing has been included in the Olympic Games and for Natasha it's a chance to make history. The film also follows Merseyside success story and local hero Tom Stalker who, at 27, has gone from stealing cars for teenage kicks to becoming Team GB captain. Having been crowned England's 2010 Amateur Champion, 19-year-old James 'Jazza' Dickens' path to the Olympic squad seems secure but he also has other things to consider. The film follows Jazza as he finds God, leaves the GB squad and joins the professional ranks, to become the fighter now hailed as a future British champion.

With exclusive access, warmth and humour, Knockout Scousers follows the fortunes of these ordinary Liverpudlians for 750 days as they strive to realise their Olympic dream, offering intimate insight into their lives and the battles they face both in and out of the ring.