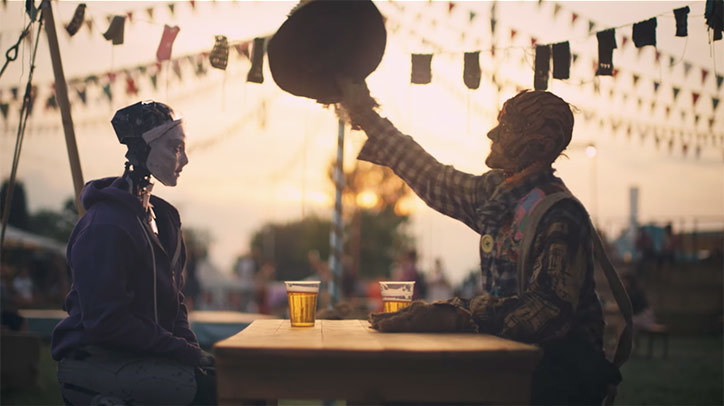 Reposted in part from It's Nice That

London-based director Kibwe Tavares has unveiled his visually stunning short film Robot & Scarecrow, made for Michael Fassbender and Conor McCaughan’s production company DMC Film, with co-producers Nexus and social media network Vero. It has been funded through a partnership initiative founded by the companies to support emerging directors.

With Kibwe as director and Daniel Emmerson as producer with DMC, Robot & Scarecrow was filmed at UK festival Secret Garden Party, and features CGI by Factory Fifteen (which Kibwe co-founded). “Kibwe’s got a totally unique approach,” says Daniel, “and had an ambitious vision from the outset that involved animating pretty much every frame of the film. We got loads from the location and after that, it was a three-year process with a small team of super skilled animators and visual effects artists, who translated the live action performances.”

Kibwe explains: “I feel the story is a weird, but straightforward, love story! The classic tale of two characters unable to be together as one is free and the other completely controlled. It’s also more than that, and is a nod to our youth culture, specifically at festivals. I wanted to create something that celebrated our love of festivals.”

Jack O’Connell and Holliday Grainger star as Scarecrow and Robot respectively in the short which was released on 31 May  exclusively on Vero.

Michael Fassbender says of the initiative: “[We] wanted to use the short film fund to build on our model of nurturing and developing relationships with emerging filmmakers.”

You can watch the full film here; check out the trailer above.