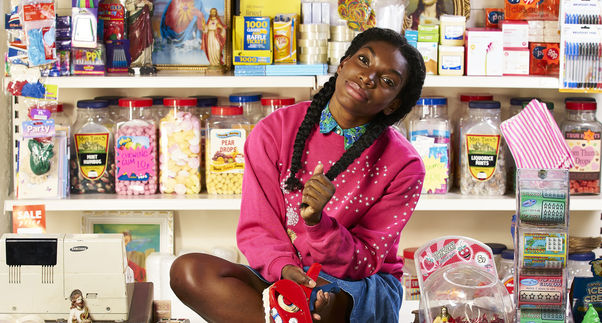 The outrageous, vibrant, colourful and multi award-winning 6-part comedy CHEWING GUM, created, written, produced and starring BAFTA and RTS winner Michaela Coel, returns to E4 (U.K. broadcaster) in January. At the end of the first series, we saw Tracey and Connor leaving the Pensbourne Estate, dressed only in their pants and walking into the sunset and the unknown. Both had been thrown out of home, Cynthia’s wedding day ended in disaster, Connor had lost his job, and their lives were all in a bit of a mess. Things weren’t looking great…

As the second series begins, Tracey’s return to the Pensbourne Estate doesn’t quite go as she would have liked. Best friend Candice isn’t happy to see her and mum Joy won’t let her in. But at least she’s back at work at Deepak’s Delectables. Tracey discovers ex-boyfriend Connor has got a new relationship, and ropes Ola into helping her convince Connor she has moved on. Connor meanwhile tells a few lies of his own in order to get Tracey to talk about what actually happened between them.

Chewing Gum is inspired by Coel’s award-winning one-woman play Chewing Gum Dreams. The play premiered at the Yard Theatre in Hackney Wick in 2012 before transferring to the National Theatre in 2014 where it won further acclaim from the press and public alike, with Time Out calling it ‘vital’ and ‘transformative.’ The series is commissioned by Rachel Springett for E4 and is produced by Retort (part of FreemantleMedia UK). Nana Hughes and Jon Rolph are Executive Producers. Michaela Coel and John Pocock are Producers. Bonus fact – this series, the Music Supervisor was none other than BBC Radio 1's Clara Amfo. Girl Power indeed!