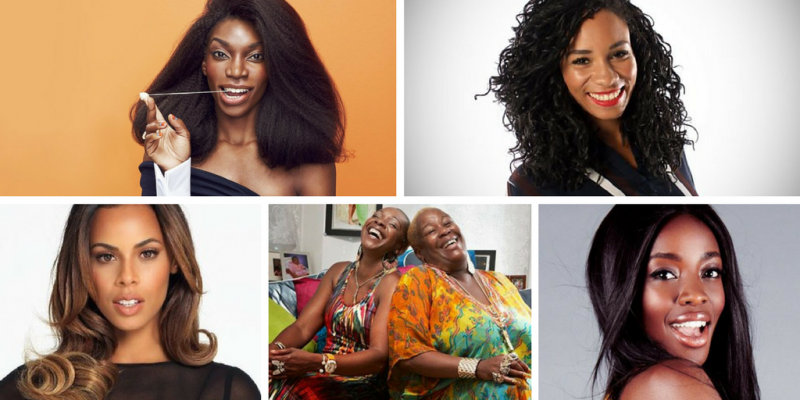 The Screen Nation Awards are back for the 12th year running. In the lead up, we'll be highlighting those up for the awards. Next up are the nominees for the Favourite Female TV Personality award.

AJ Odudu is a British television presenter born and raised in Blackburn, Lancashire. Her first presenting roles occurred in 2009 where she featured in the BBC Two series The Almost Perfect Guide to Life. Now in 2017, AJ can be seen co-presenting 4Music's Trending Live with presenter Maya Jama.

It's been a great year for Michaela Coel – she starred in Black Mirror and also lead a strong cast in E4's The Aliens, where she played Lilyhot, an extra terrestrial living in an imaginary Britain. Last year Michealea won BAFTA for Best Female Perfomace in A Comedy Programme. This was for her global-hit comedy Chewing Gum.

Michelle Ackerley – The One Show, Crimewatch, All over the Place

Michelle Ackerley is an English journalist and television presenter. She grew up in Manchester and studied Psychology at University. Now known famously for her work on the BBC, Michelle can be seen on programmes such as Watchdog and The One Show.

Over the last few years, Rochelle Humes has made a successful transition from popstar girl group The Saturdays to presenter on some of television's biggest shows. She currently co-presents Ninja Warrior UK, ITV’s British version of the Japanese assault course game show Sausuke.

Best pals Sandra Martin and Sandi Bogle from south London have featured in the Channel 4 series Gogglebox since March of 2013. The pair proved to be particular favorites with fans for their priceless reactions and great sense of humour.  Sandi Bogle has recently quit the show to purse her music and television career but insists the doors are always open for her back on the series.